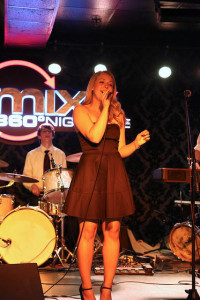 A professional who services the music industry recently told me she wrote a book after coming in contact with so many nightmare parents. Every parent believes their child will be a star. What gets missed in the process if this does not happen, are the advantages music provides your child in day to day relationships, confidence boosting and multi skill development. Managing a band with young performers is in line with managing a corporation. There are many personalities, needs, differences of opinion, calendars to get in sync, jealousy flairs, financial issues and so on. This story is about a family that simply stands out in terms of their support for their daughter’s music career, and how they successfully managed all the relationships that surrounded them from the band manager, band members, parents and professional team of teachers, trainers and producers.

I first met Joe and Kathy Neves over six years ago when their daughter entered our showcase at the Hard Rock Café for 13 and under performers. Shortly after the showcase, we had an audition for a new pop/rock band, Coda Sky, and she signed up to audition. At that time the young performer, Rachel Neves, was a country singer, but we saw great potential in developing her into a diverse performer who could cross many genres. She was selected as the lead vocalist in the band. Fast forward to today, she performed in over 150 engagements, won and placed in many music competitions and contributed to an album of 11 original songs. Her album was presented to all the colleges she applied to and was an integral part of her application process.

Having the Neve’s young performer in a band presented many challenges.

During the four plus years I have worked with the parents, I have been impressed with the Neves dedication and support for their daughter’s career. Furthermore, they have been honest and professional through every step in the development process.

There were many reasons why the Neves were great parents to work with.

This fall we learned that Rachel would be entering college and she would not be able to do as many live performances. Her first term of college she earned a 4.0 at Suffolk University, and she recognizes that was only possible through total dedication to her studies. During midterm week she decided she couldn’t commit to a great gig in the Boston area due to her school work, but her parents called me to let me know they were going to come to the show anyway as they wanted to support the band. They also purchased tickets ahead of time which helped with our ticket quota. This was shocking to me, as I don’t know many parents that would have done this and driven three hours if their child were not in the show. As it turned out, Rachel finished her final papers early and was able to come and perform a few songs at the event.

Great parents do the unexpected. They try to help any way they can. How many times have I heard, “my son/daughter was told they will be signed right away due to his/her talent”? In my nine years in this industry, I do not know any cases where this has happened. It requires a dedicated focus, financial support and hard work to get recognized in this industry. When you see young performers opening up for top industry stars, most of the time parents are writing huge checks for those opportunities or have unique connections others don’t have. There is so much entitlement out there which unfortunately clouds reality and makes people have unreasonable expectations.

The one comment we always heard about the Neves was “They are so nice”. We heard this time and time again from other young performers and industry professionals.

Your reputation is your child’s reputation. When a child is interviewed for an opportunity, the parents are also interviewed. An industry professional just told me she had to fly across the country to police the parents during a recording session so they wouldn’t interfere. We hear stories all the time of young performers missing out on opportunities due to extreme parent involvement which adversely impacts the work agenda and artist development process. It can be so disabling to the management team, that valuable development time is lost.

Be nice to everyone involved in your son’s/daughter’s career and new opportunities will appear.