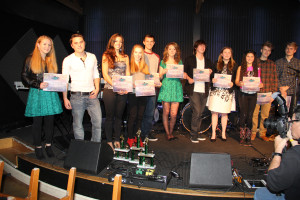 ” I can easily say that the Young Performers Club has shaped me into the musician I am today, and if it weren’t for all of the showcases, I would have never gotten into my dream school with a scholarship. So thank you for all you’ve done for me and others. I’m excited to still be a part of these events and help such talented kids develop in the same way others helped me.”–Cassie Wise

The Young Performers Club is the longest and largest running talent program for young performers in the North East region.

The Club (formerly Music On & Up) has been dedicated to building an active young performer community for the last nine years, creating performance opportunities and showcase events for young performers ages 21 and under. Unfortunately, the performance opportunities are tough to find if you are under age 21, so we plan to create these unique opportunities to enhance talented performers’ resumes and performance experiences. To date, the organization has had over 1000 performers participate in their events which have taken place at the Boston Hard Rock Café, Capone’s Restaurant, and Tupelo Music Hall in Londonderry, NH. Many former artists have established impressive careers, with Megan Trainor, the most recognized name after being nominated for two Grammys and having her album top the charts in both the US and the UK. Over fifteen states have been represented and the events have consistently had a full house of fans and supporters. The Grand Finale Showcase event provides cash awards/training tuition to the top performer selected by a professional judging panel. Additionally, we are the producers of the Teens Rock America event and Little Big Shots of New England. In 2017 we will debut our first Northeast tour for young performers, the All You Got Tour, through our partnership with Next Generation Concerts. The tour, the first ever 21 and under music tour of its kind, based on its unique mix of the arts, will rock throughout the Northeast from June through December 2017.
Tour performers will be selected through an audition process taking place on April 30th at Mixx 360, one of the lead venue sponsors for the tour. Additional venue sponsors include the Boston Hard Rock Cafe and Breakaway in Danvers, MA.

Together with Next Generation Concerts we plan to to in excess of fifty shows in 2019. These shows will consist of concerts, charity events, competitions, and acoustic events.

Music On & Up supports children’s charities and has participated in dozens of festivals and events that benefit charities such as the Jimmy Fund, Green Schools and local and national anti-bullying programs.

In November 2011 the Young Performers Club had an open audition event for forming a new teen band. Five band members were selected for the new band named Coda Sky. The band is a co-ed band with layers of raw talent, rare vocal depth and fresh energy that attracts audiences of all ages. They are a five-member Boston based teen power-pop/alternative rock band comprised of three boys and one girl; Cameron, Mike, Jesse, Ian, and Rachel. They range in age from 14 to 19. The band is female fronted, has three backup vocalists, and four award-winning musicians. The audition attracted the best of the best teen performers from the greater New England area. The objective was to form a band which had male and female vocal depth, strong and well-balanced musicality, a serious commitment to succeed, and be in a standalone class for its extreme raw talent. Since they started, they have performed in over one hundred engagements and have been nominated for many music awards. Additionally, in 2018 they were selected to be the musicians and vocalist on a new song written by a CA business, which will be provided to military families. The website

Under the guidance of their Manager, Patty Duffey, owner of The Young Performers Club and Music On & Up, they will be positioned to rise up the charts as a top co-ed teen power pop/rock group. The music is upbeat teen rock/pop songs with a bit of country spark. Also, working with the band as their Music Director is Marc Delcore, who is also Brittany Spears Music Director.  As the management team says, “This is raw talent all together!”  The band breathes a fresh new style and teen class to the pop/rock music scene.

They have also been nominated for numerous industry awards for their anti-bullying song, “I Don’t Deserve It”, and recently released follow-up songs, “One Day”, and “High Five” which provides the message that positive thinking can make a difference. They work with top industry writers and producers and will be adding several new originals in the coming months. They were awarded the Limelight Magazine “Breakthrough Artist of the Year” in 2013, were nominated for the New England Music RADAR award in 2015 and were nominated for the House of Blues Bringin Down the House program in March 2015.

In 2017 Duffey started a new teen pop band (ages 13-16), Catching Arrows. The band has developed an extensive resume including being on the All You Got Tour, opening for Kidz Bop two years in a row, and performing at several events at the Boston Hard Rock and the Hampton Beach Seashell. The winter of 2019 they will be recording their debut EP and first single, “Lost in the Stars”.

“There is so much more to do”, Duffey will say anytime you speak to her. Every gig will make a difference so she will continue to create new opportunities and get more doors opened to young performers in New England region and beyond. Every time a door is shut on a young performer the Young Performers Club plans to work hard to open several more!