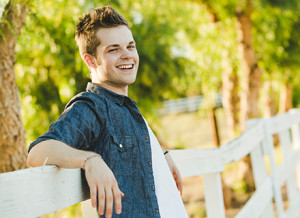 It all started with songwriting for this talented young performer, and it was well before he knew how to read a note. Skyler Clark-Hamel, known as “Skyler” to his fans and friends, has been writing music since he was just five years old. He credits his mom for his passion for music after introducing him to the Beatles when they were driving around in the family station wagon when he was in grade school. “I was a total fan, and I loved watching a Hard Day’s Night and seeing all the screaming girls going berserk in Liverpool”, he stated. It looked like so much fun and at that young age he decided he wanted others to love his music the way the Beatles music was loved. Training on drums, guitar, bass and piano kept him busy through middle school. Since then Skyler has written over 100 songs, and produced several albums and EPs (Long Gone, Take You Away, Restless Heart, and One Voice).

He has worked with professional producers in Boston, LA and Nashville, and has also self-produced many albums. Skyler is a committed artist who won’t let obstacles and challenges interfere with his vision. After a year at Berklee College of Music, Skyler set out with his band to travel the country and perform and produce new music. Many times, he felt he had the right attitude and commitment from his bandmates, only to discover they were not on the same page and wanted something very different. One became a missionary, one couldn’t manage all the traveling and one wanted to be closer to home. It was so much tougher than he thought, and was a lot of starting and stopping. It was something he couldn’t control no matter how much confidence he had that the bandmates were in alignment. He soon realized the one thing he could control was himself.

After being in several bands, Skyler recently packed up his car and headed from his apartment in Concord, MA to Nashville. He will follow through with his commitments with his current bandmate in the duo, Skyler and the Brit, but at the same time will be focused on his solo career. Finding another artist that is aligned with his intentions is the top challenge, he explains. The duo is traveling the US performing at college shows which he said provide great financial security and national exposure. This month they will be in Washington, CA, OH and UT, and you can tell he just thrives on a busy gig calendar.

Skyler loves to tell a story with his music which captivates audiences. He has performed in many Young Performer Club events and has been a guest performer at our showcase competitions. What makes him unique is his natural audience connection and effortless smooth vocals. You feel like you are the only one in the audience and can feel his passion and love for performing. He is also a professional, following up right away on phone calls and emails as he knows every opportunity gets him one step closer to making it.

In 2014 he was awarded “Best Small Venue Artist” by Campus Activities Magazine. Whether solo or with his many bands, Skyler has performed over 500 shows in venues of all sizes and has shared the stage with the Goo Goo Dolls, The Band Perry, and Daughtry (to name a few). In 2012, he appeared on the X Factor, was the national spokesperson for Safe Teen Driving for the AllState Foundation, and had his song, “Stephanie,” used in a Supercuts commercial.

When asked what his advice to young performers is, he responded, “to be fearless and determined. You need to make sure you have the drive and that what you are doing with your music you really love. You will need to make compromises in life for your music so make sure you love it. Don’t try to fit into molds that don’t work for you. After making so many compromises it takes away the fun. So you need to focus on keeping it fun!”

Skyler feels you need to pay attention to being happy first and then success will follow. At first he had his priorities backwards he admits. He will continue to be fearless and learn through each engagement, music relationship, challenge and accomplishment. While he describes his past experiences with bandmate relationships as devastating, he now recognizes there are other positive directions to go in and that being dependent on himself will only continue to strengthen his quest to become a well-recognized career artist with screaming fans.

There are not many artists who can escape the challenges present in relationship dynamics, so stay focused on your mission and career goals, and keep your goals in clear view at all times.